XNouns are Nouns with the X factor. Every 8 hours 8 minutes and 8 seconds a new XNoun is born. XNouns are well known enjoyooors of XCOPY artworks. 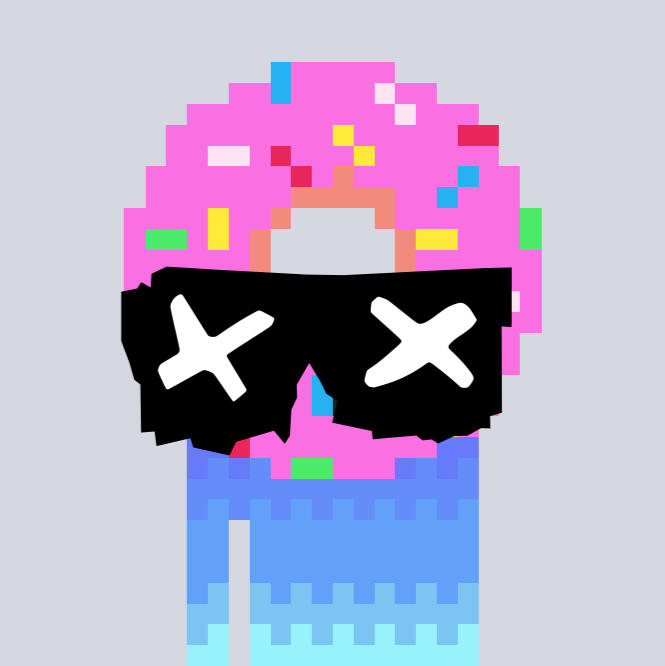 ⓧ Copyright is for the untokenised.

XNouns fuses together the worlds of Nouns and XCOPY; often wearing Summer Glasses... at night.


The first XParty guests have started to arrived. 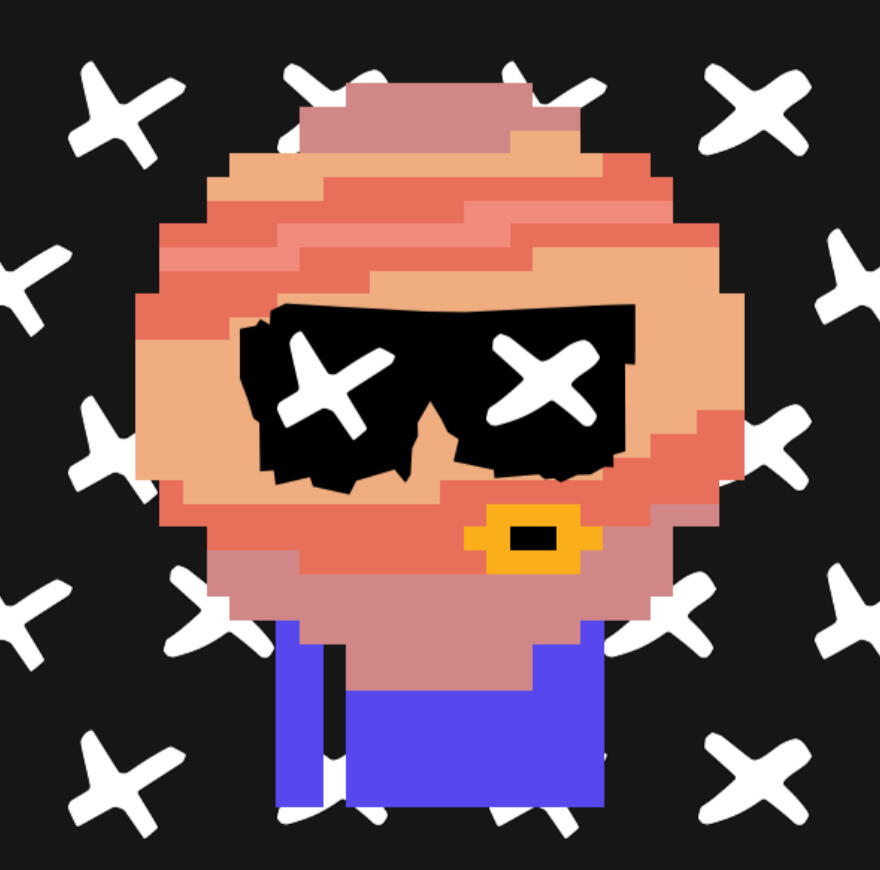 XNouns holders are XCOPY art enjoyooors. Each XNoun holder gets a say on their favorite XCOPY they would like the XNouns treasury to own.XCOPY Editions
There are 76 XCOPY artworks available to choose from.Every successful XNouns auction gets the treasury closer to acquiring its first XCOPY edition. Five examples based on XCOPY floor price: 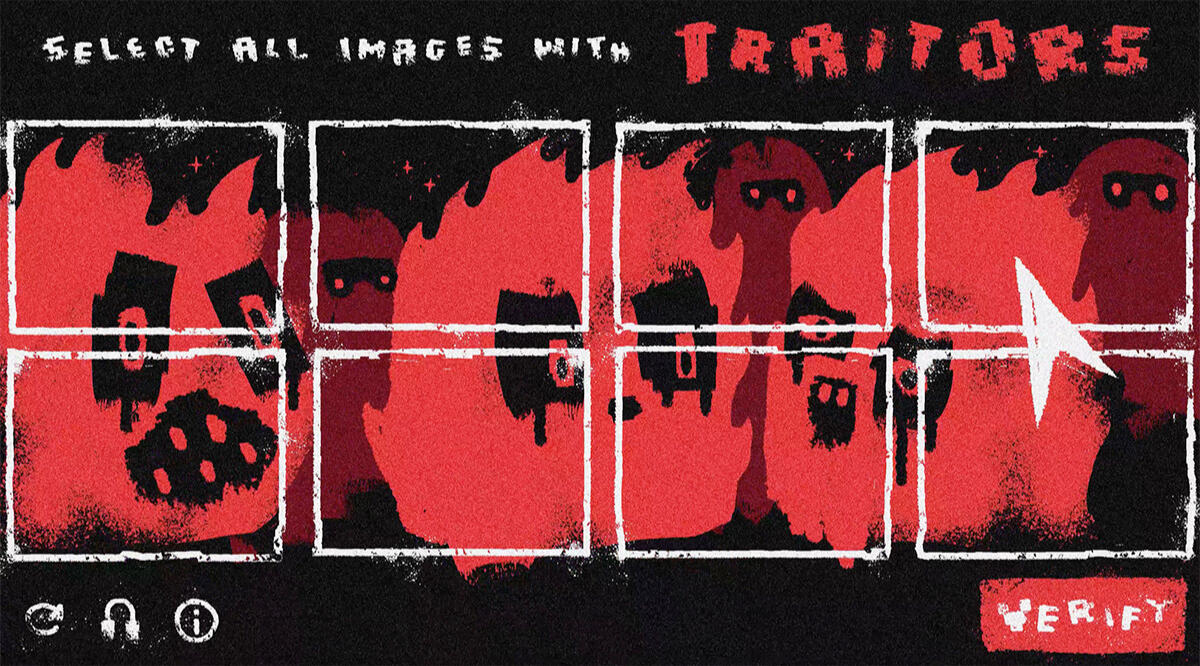 Short Time Horizon
XNouns releases a new XNouns every 8 days, 8 minutes and 8 seconds. Each XNoun starts with a minimum bid of 0.008 eth. You must win and settle the auction to become an XNouns holder.Long Time Horizon
XCOPY Editions are held by the DAO for a minimum of five years.
XNouns DAO keeps minting XNouns until 1st January 2028 at the earliest. The 5 year window is a nod to the original Nouns project. After that point, the DAO will continue unless the DAO decides not to DAO anymore.Read more about project contracts technicals, founder and NounsDao benefits here or read the Frequently Asked X's.

XNouns combines the artistic freedom of Nouns with a little X factor.

The dark, glitchy aesthetic and societal commentary first appeared minted by XCOPY in the artwork titled 'Cracked' on 27th June 2018.

Let there be light
Summer.jpg was minted by XCOPY on Aug 2nd 2021. The work heralded a marked shift away from the darkness.The wild heat of the JPEG Summer of 2021 took hold as cryptoart history echo'ed beyond its earliest pioneers. There is a season for everything. 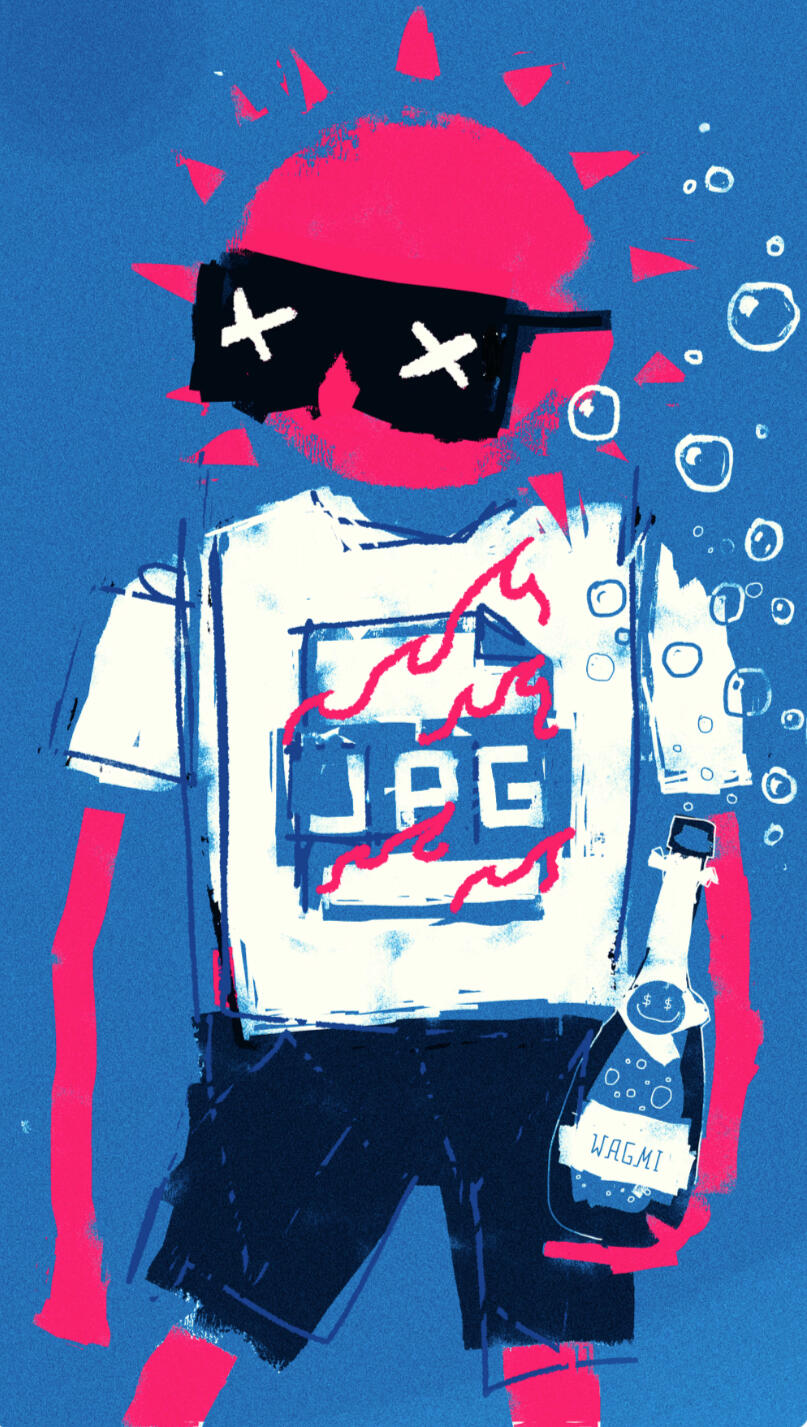 XNouns Summer Glasses
The XNouns glasses are derived from Summer.jpg.

More darkness. Less summer.
Fast forward to Nov 15th 2022 and the gloom is back.'Winter Shade' is a MintFace derivative overlaying 'Summer Glasses' with 'Max Pain' to capture a hidden feeling of inner turmoil at the external reality of events.

Winter Shade celebrates the gloomy demeanour of NFT Twitter in an ironic way, by wearing Summer Glasses at night. The juxtaposition became the catalyst for XNouns wearing Summer Glasses.The XNouns iterative creative process draws upon XCOPY, The Memes by 6529 and Nouns, and by doing so, demonstrates the power of artists releasing their work under CC0 to encourage remixing for new meaning and reward creativity.

The Power of CC0
XNouns are made possible because of three art licensing unlocks:1. XCOPY released his entire art canon under CC0 one year after minting summer.jpg. View tweet 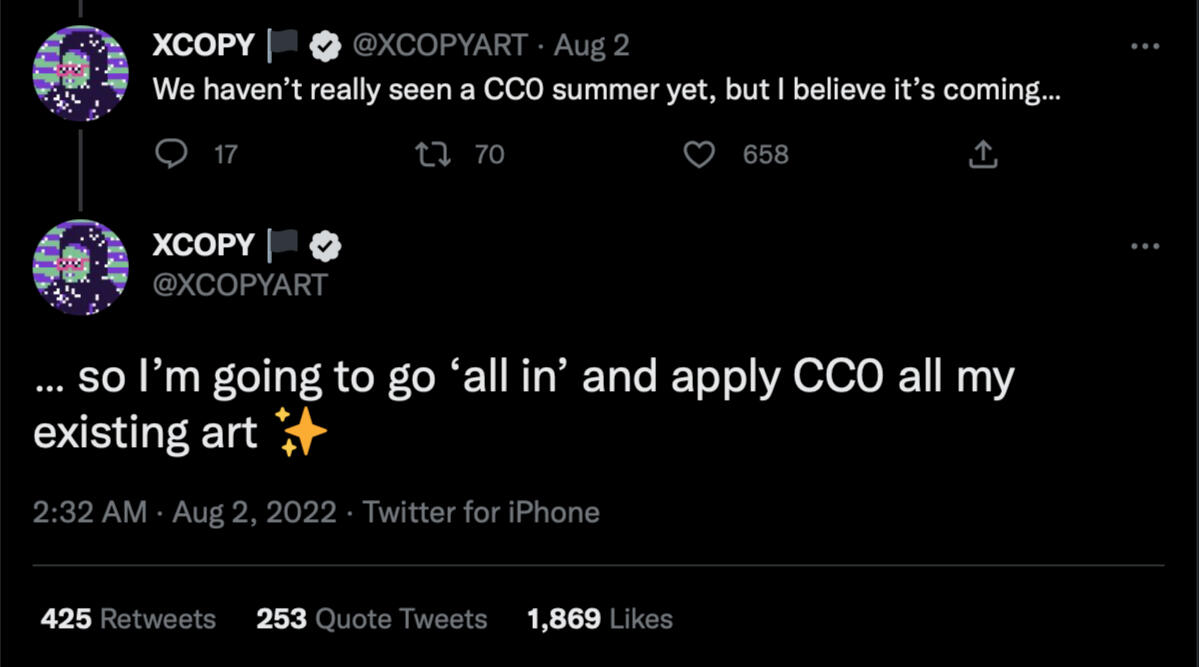 2. 6529 releases The Memes collection under CC0 including Summer Glasses in collab with Neonglitch86 and 6529er. 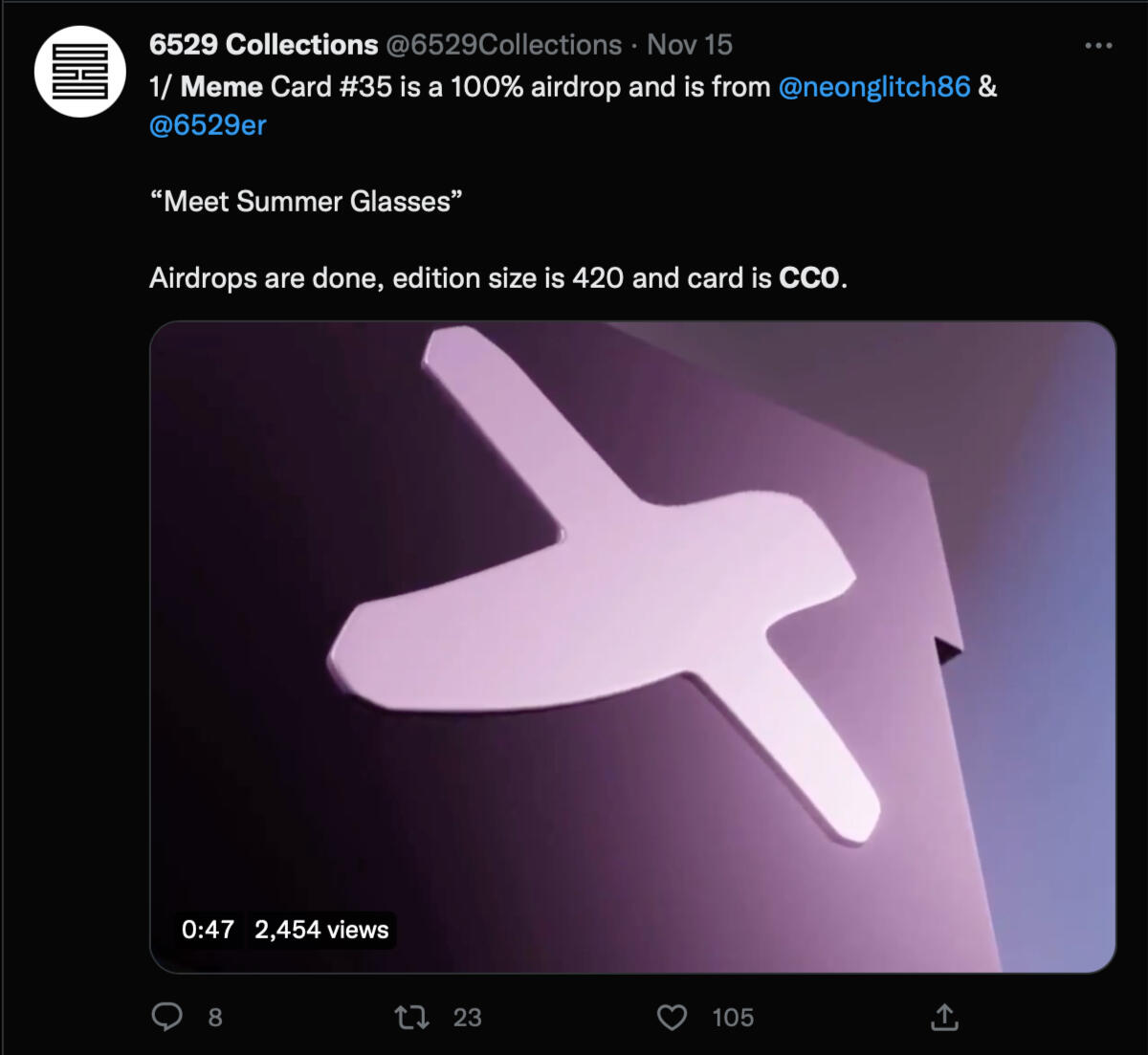 3. The Nouns project was setup as CC0 from its inception on 8th August 2021 including both the artwork and the auctioning and distribution mechanism.

The Web3.0 mission continues.XNouns would not be possible without the public licensing of artwork by XCOPY, 6529 and Nouns.The Nouns public licensing goes beyond the art to include on-chain auctions and governance worth exploring a little more.

The Nouns experiment officially began when Xaix won the auction for Noun #1 on 8th August 2021.The Nouns community led the way on how to buidl community around a pseudonymous identity, through on-chain governance and auction funded treasury.The First Noun Sale
The sale was the culmination of an artistic vision shared by Gremplin and Punk4156 and assisted Timpers, eBoy and more artists, who had begun drafting up the Noun aesthetics on 6th March 2021. 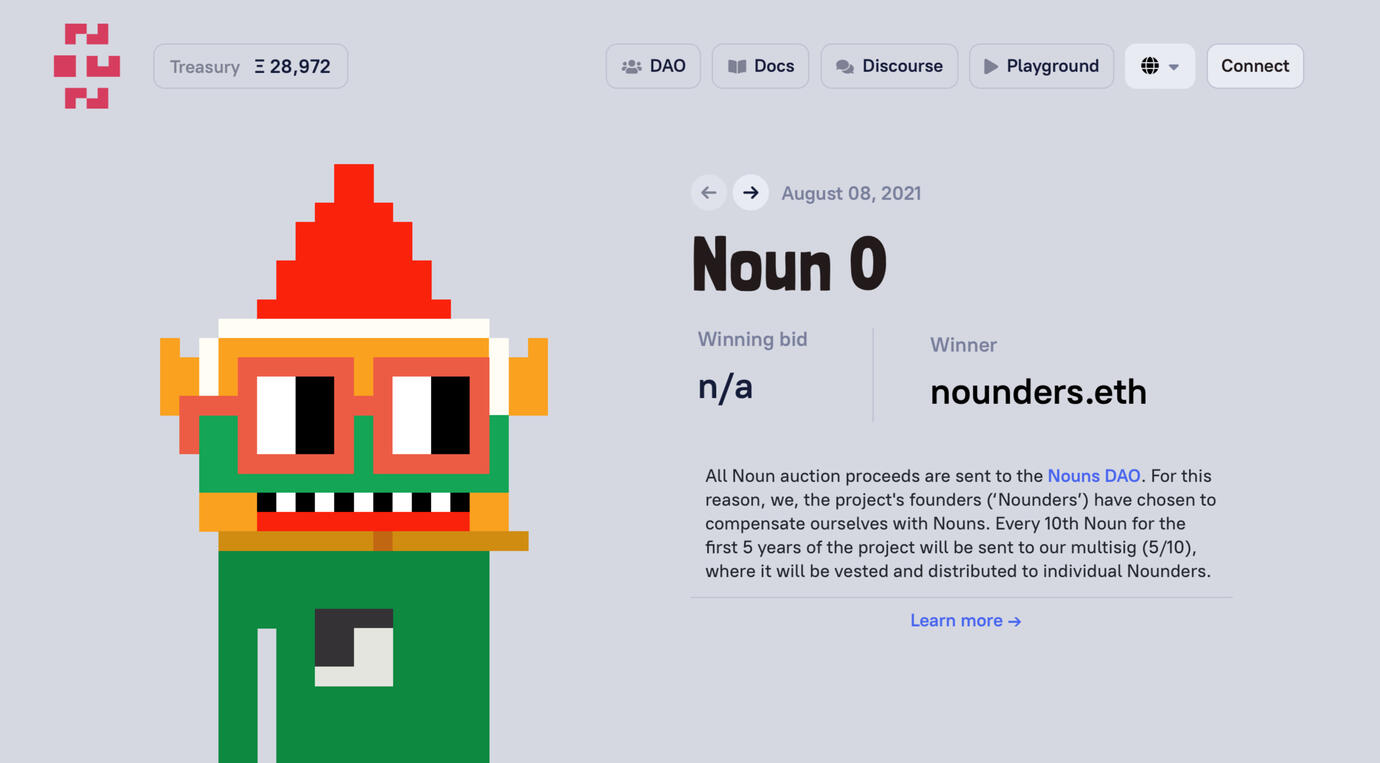 Noun Auctions
The innovations in the Nouns projects can be felt beyond its on-chain avatars.The self-sufficient Noun generation and distribution mechanism invented by NounsDAO, has unlocked the possibility of collective creation by many projects including Lil Nouns and Fomo Nouns and now XNouns. 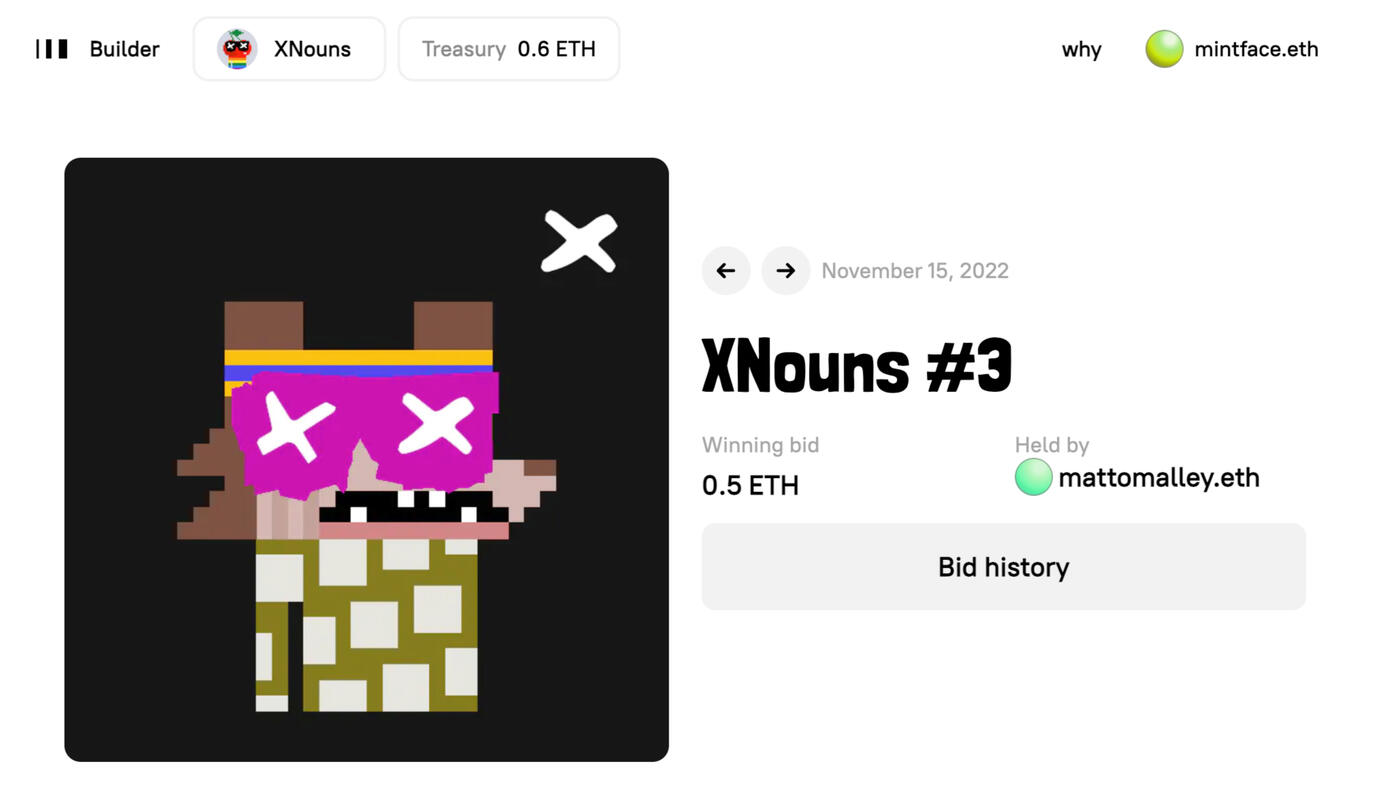 Each XCOPY Edition was tokenised and a group of art appreciatooors invited to share ownership of an artwork minted on the blockchain.

As token standards evolved, XCOPY evolved with them. 'Cracked' was minted as an edition of 10 on ERC-20 tokens, 'Resist' as an edition of 25 ERC-721 tokens and XCOPY's largest collection, Max Pain minted as 7,394 ERC-721 individual tokens.View the dashboard of 12,220 XCOPY editions thanks to crypto art number crunchooor 0x_Catherine.XNouns give art appreciatoors the opportunity to share ownership of an artwork on the blockchain.Plus everyone who owns an XNoun gets to rock an XNouns pfp through the gloom of NFT winter......until JPEG summer returns.

XNouns token: 0x2969Eca285C9acD0B7EeDEbE7714C4D913700794
XNouns auction: 0x73924Aa28f23256D994E20803a6C63d9dd056d7d
XNouns treasury: 0x8e2e23364745003Ccf8a99d17661C2790e8d6748
XNouns governor: 0xC00d0a3d1C16D957F278fa8Cccb8B69B763f6a2a
XNouns metadata: 0x8404010B9f9423B952aE74C0E51459fF18a049D2XNouns Benefits
No benefits are made explicit for holders of XNouns beyond the tokenised on-chain ownership of XNouns art in return for winning an XNouns auction.XNouns Treasury
The XNouns Treasury is for the purpose of acquiring one or more XCOPY Editions only.If after five years, the XNounsDAO votes to discontinue the auctions, the XNounsDAO will be shuttered. Any and all XCOPY Editions will be disposed of at market rate at the time, and any resulting Ξ distributed back to XNouns holders on a holding % basis.Founder Benefits
MintFace receives 8% of all XNouns tokens (441 in total).
MintEstate receives 2% of all XNouns tokens (153 tokens).NounsDAO Benefits
NounsDAO will receive 2% of all XNouns tokens (107 in total)

Frequently asked questions about XNouns are shared here.Q, What's the move?
X. If you like the XNoun art, bid on an XNoun.Q. How many XNouns have you designed already?
X. No one knows the aesthetic before the auction begins. The XNouns are born by combining art component derived from Nouns and XCOPY Summer Glasses.Q. Do your plan on buying an xcopy as soon as enough funds are available in the treasury?
X. It is up to XNoun holders when an XCopy edition is purchased. A proposal vote is scheduled to take place every 90 days, 4 times a year for minimum of 20 times over 5 years.Q. Where can I ask a question about XNouns?
X. The MintFace Discord.

The first ever 100 XNouns to arrive at the XParty will be honoured. 25 have arrived already. 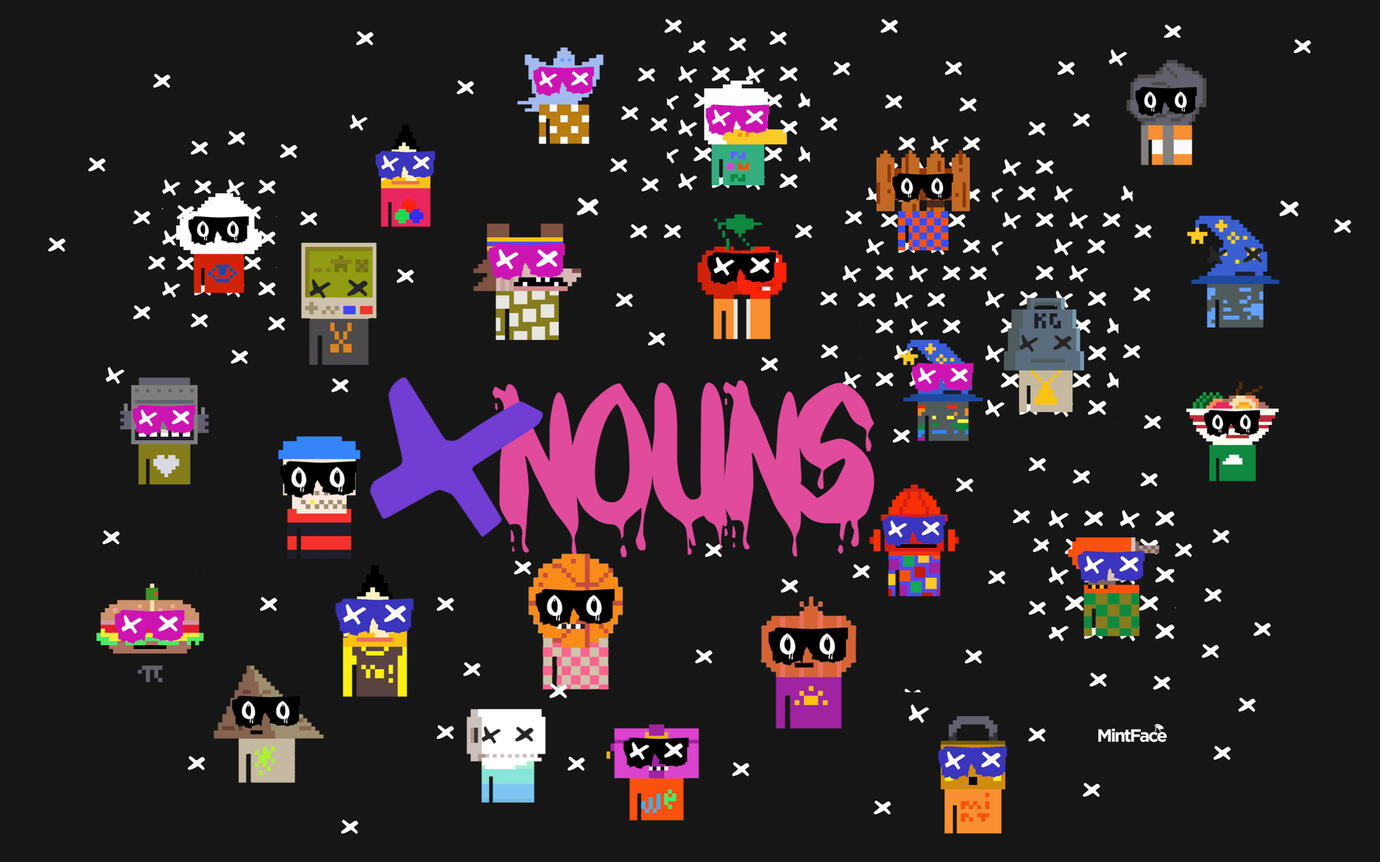